Since my wedding was during apple season and held in SoCAl’s apple country I decided to put apples from a local orchard on everyone’s plates. Hearing this plan, the florist suggested using manzanita trees to decorate the tables; as though the apples had fallen off of the trees! These manzanita trees were covered in purple and orange flowers and little mason jars filled with water, crystals, and LED candles hung from the branches. They looked amazing especially as the sunset. 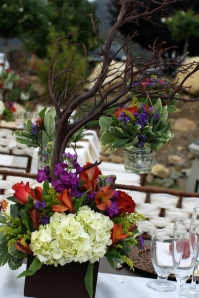 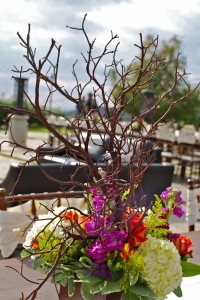 After the celebration we suddenly  had 12-14 manzanita trees to take home! When Luke and I came back from our honeymoon we had a going-away-party at my parent’s house. So I thought: Why not use one of the manzanita trees as a centerpiece?  I filled the  mason jars with candy corn pumpkins,  placed pumpkin spice candles in the center ,and lined the bottom with fall leaves. 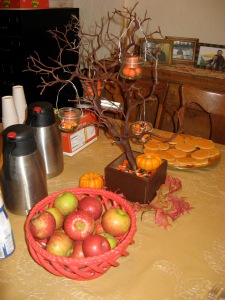 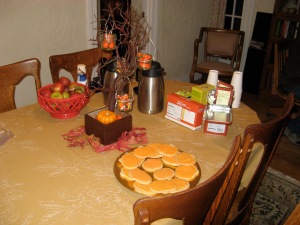 When it was time to move I decided I  would bring one of these trees with me to be a holiday/seasonal decoration/centerpiece in our new home. I stole the sturdiest one that looked brave enough to bounce around in a bright yellow Penske truck across the country. It suffered a few bumps and bruises-lost a few twigs along the way but  survived the cross country venture. 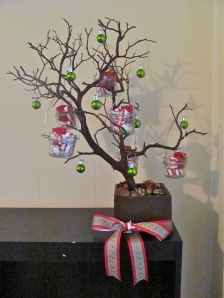 For christmas I bought red cinnamon candles and cut up soft peppermints to line the mason jars. Mini green ornaments hung from the branches and the bottom was filled with a cinnamon decorative pine cone potpourri all tied up with a peppermint Christmas ribbon. 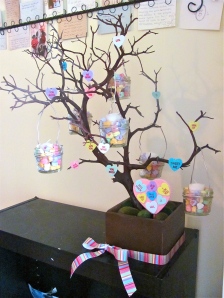 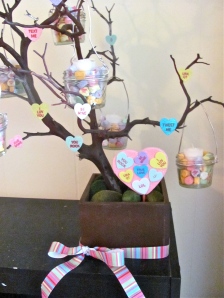 Valentine’s Day I bought vanilla candles and filled the mason jars with conversation hearts. Conversation heart stickers were placed on the tree and a large Styrofoam heart was covered in the same stickers. I also found some moss rocks to line the bottom which looks like grassy hills and once again it was finished off with a ribbon to match. 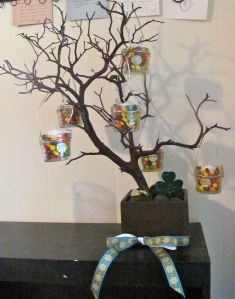 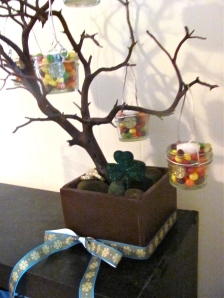 For St. Patrick’s day I used the same vanilla candles but filled the mason jars with skittles to represent the rainbow leading to the pot of gold. In each mason jar is hidden one little gold coin, a small pile of gold coins is also sitting under the tree next to the lucky clover.

Luke likes to call this our Charlie Brown Tree but I think it reminds me more of the holiday gate trees found in the woods in A Nightmare before Christmas.

What do you think?

Do you have traditional decoration for specific holidays?

What do you like to use as centerpieces for your celebrations and parties?

3 thoughts on “Holidays grow on Trees”