My husband’s b-day was this past Monday and I wanted to make him a cake. He’s not big on traditional b-day cake but loves cinnamon rolls. I thought: can I make cinnamon rolls into a cake? The answer is yes! I am not the first one to think up this idea the credit for the original idea/recipe goes to Bakers Royale. But I like to tweak and re-write recipes (yes a real recipe this time!)

So this is my version of the Cinnamon Roll Bunt Cake:

To make the dough:

To make the filling:

Meanwhile to make the glaze: 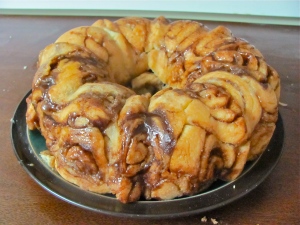 After 3o or so minutes:

I chose to let some icing pool to center hole. Once the icing had set, I filled the hole with fresh raspberries. When the cake was served we spooned out some fresh berries and icing to place onto our slice. I suggest raspberries for spring or cranberries for winter because their tartness balances out the sweetness of the cake.

It is not quick, easy, or healthy but it is so worth the time, effort, and calories.