I know that technically summer doesn’t hit for another two weeks. But considering that I have been sunburnt the last two Sundays in a row I think I’ll say that summer is here.

Speaking of Sunday, we had the chance to go kayaking with John a co-worker of Luke’s and his wife Kathy this weekend. Luke and I enjoy kayaking and living in the Finger Lakes region of New York we knew we would want to explore the many bays, lakes, and rivers in our neighborhood .

John suggested we check out a place in Rochester called Bay Creek Paddling Center . So we left the house around 8:45am to drive the hour and forty-five minutes up to the Irondequoit Bay. While we waited for John and Kathy to arrive, Luke and I explored the wide selection of tandem and single kayaks for sale.  This paddling center has Old Town canoes, paddle boards, and river and touring kayaks for sale. They also provide kayaking and paddle board lessons and camps. Click here for more on that. 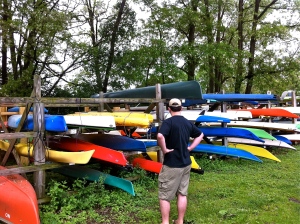 We filled out our rental agreement and decided to meet John and Kathy, who were bringing their own boats, in the water. This gave us a chance to  adjust to our river boats. (I am much more familiar with sit-on-top ocean kayaks).

Once we got settled, we headed under Empire Blvd. (the 404) leading into the Irondequoit Bay. (Click on The Bay to find out more).  Passing fishermen on the bank we rounded the corner and saw a swan hiding in the bank of reeds.

We then turned back towards what is described as the “Secret Wilderness”, a passageway through estuary-like water paths. Here we caught up with John and Kathy talking as we slowly paddled down this quiet narrow waterways lined by tall reeds, trees, and wildflowers. As we turned corner after corner we watched swans pass by gracefully, oreles perch on the tops of the reeds protecting their nests, sparrows dive for bugs near on the water’s surface, and herons take off into flight.  Kathy told me if you come at the right time of year you will also see geese and their gosling.

We were lucky to have the place mostly to ourselves, running into only a few fellow kayakers.  The weather report had threatened thunder storms but we only received small rain spurts. The wind brought a temporary relief from humidity as it pushed the clouds away bringing bright sunshine.

After about an hour and a half paddle up stream we decided to turn around allowing the current to take us back to the Bay Creek dock. It required little effort for the return trip, no more than a paddle here or there to steer through the banks and turns.

When we got back we returned our rentals and John and Kathy gave us a chance to check out their boats.  John and Kathy both got their kayaks through Bay Creek and so could use their guest dock for free.  One of the great things about Bay Creek was that the money spent towards a rental can eventually go towards a payment for kayaks. (See here for more benefits.)  After paying for our time on the water we discussed plans for a late lunch and headed to a well known Pit BBQ joint called Sticky Lips.

A short drive from Rochester towards Henrietta, Sticky Lips Juke Joint is right of the 390 freeway. You could smell the spices and hear the jazz and blues music as we walked into the brick building with signs for BBQ Fire Pit in the top windows.

We met up with Kathy’s son and his girlfriend then were seated and handed menus. As everyone decided what to drink from their large local beer and wine selection, I looked around: eclectic signs and decor from local Rochester and upstate New York events and businesses.  John also told me that on the lower deck seating area there is a stage where live music is played four nights a week. 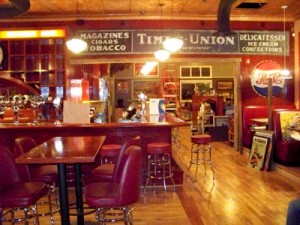 After ordering drinks we took a look at the vast overwhelmingly large menu: ribs, brisket, pulled pork, BBQ chicken you name it they have it including vegetarian options.  After second guessing ourselves several times, Luke chose a combo of pulled pork, beef brisket, and 1/4 ribs in their spicy BBQ sauce. with chorizo and cheese grits and ratatouille for sides. I also go a combo with brisket and ribs with mustard coleslaw and mac’n cheese. And of course all meals come with honey glazed cornbread.

When the food got to our table, it was obvious it would be well worth any wait. The cornbread was crispy sweet on top and fluffy on the inside, the ribs were fall-of-the-bone moist, the brisket well spiced and also very tender. And the sides were not a side note. Although they were all amazing, the favorite by far was the chorizo and cheese grits. By the look on Luke’s face he could have eaten about 3 more servings of it.

We ended up getting a to-go box for about 1/3 of the ribs and a few pieces of brisket but not before Luke smothered them in the spicy bbq sauce. Happily satisfied with our delicious and yes sticky meal we thanked John and Kathy for a great day out and drove in the unpredicted sunshine home to Corning.

How was your weekend?

5 thoughts on “Kayaking and BBQ: the perfect summer combo”