After a week back home re-seettling into our normal routine, we realized we had an long standing plan to go with a co-worker of Luke’s and his wife to a tasting festival Saturday in Ellicottville.

We had high hopes for this tasting event, enough to make it worth getting up early on our day to sleep-in. After an hour drive during which we fueled up on to-go cups of coffee, we met Jon and Cathy and carpooled with them for another hour before reaching Ellicottville. 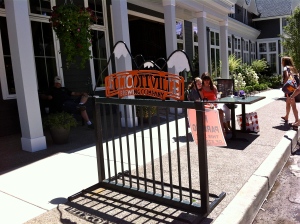 We arrived around noon and stood in line to buy 20 dollars worth of tickets. Ellicottville is  located between two large ski resorts and boasts several well known festivals year round. With it’s own brewery and winery and unique stores it is obvious it is used to tourism year round. 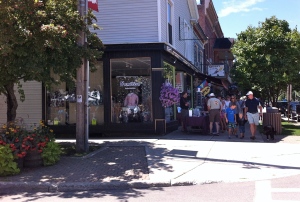 After getting our tickets we took a look at our menu map indicating where each local restaurant had set up their booth, what was being offered, and how many tickets each tasting would be. The variety and options were amazing. There is no way that even if Luke and I got different things to eat the we could have sampled everything. 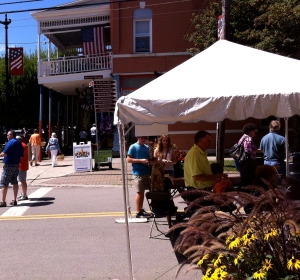 We decided to start with Centerplate mahi mahi fish taco with a mango salsa and habenero cream sauce.  It had a great sweet, tangy start with a kick. We realized quickly that at each booth there was plenty of time to  socialize, we would need to got accustomed to waiting in lines today.

Next we crossed the down town block to Balloons where we sampled some of their buffalo and sweet thai chicken wings.  In heighn sight I think we got too many of the tangy vinegar wings (6 for 4 tickets) the name of the game here is to take tiny portions so you can sample more before getting full. 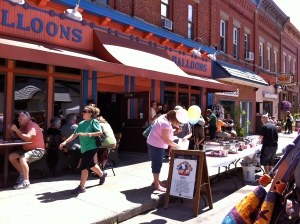 After a hearty snack (the portion of my normal lunch) we headed to the Ellicottville Brewing Co. Stepping onto their crowded back patio we found some benches around the fire pit lit to keep the bugs away in spite of the warm weather. Luke ordered a sampler and Jon and Cathy enjoyed some light brews. 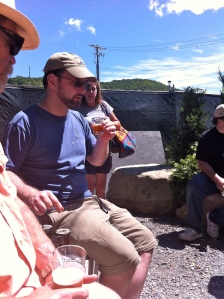 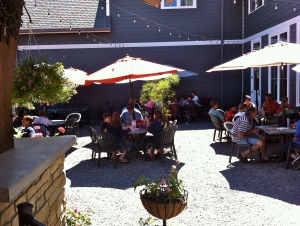 Then we moved on in search or more delicious treats. Heading up the main street we got bacon jalepeno slices from Katy’s Cafe  that definitely had the expected warm after-burn. Crossing the street we then got in line for Dinas who had both a dessert and food table. Luke and I decided to share a sample of their spinach ravioli. Their red sauce was fresh, simple, and very authentic Italian.  (Let’s just say Luke and I both had planned to scrape the remaining sauce from it’s container.) 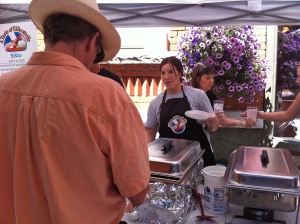 We walked a little further down the street and came across Watson’s Chocolates. For 3 tickets I bought a chocolate covered salted carmel pack of two dark chocolate and two milk so Luke and I got one of each. They were chewy, creamy, and just the right combo of sweet and salty. 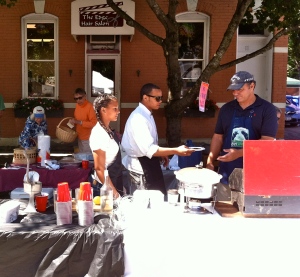 By now I was getting beyond full and I could tell so was everyone else. So we decided to walk around and explore what other restaurants we hadn’t tasted from. We spotted a kebab and curry place, a place selling mexican and smoothies, another selling shepherds pie and Guinness mac ‘n cheese . They all sounded wonderful but we were full and decided to save our last few dollars for some take-away dinner. 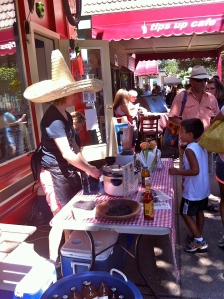 But we weren’t quite ready to leave. After picking up a few more tickets for dinner food, we decided to check out a few of the stores including a three story narrow storefront devoted only to selling socks. We then crossed the street and did a wine tasting at the Winery of Ellicottville. 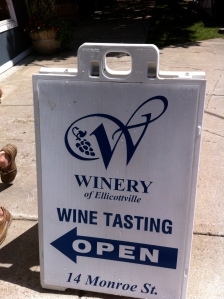 After this we decided we were done exploring and ready to pick up our dinner from Riley’s : two servings of large portioned ribs and blueberry cheesecake. 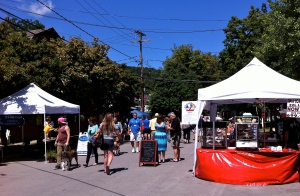 Overall for about 30 dollars, Luke and I got lunch, dinner and dessert for both meals. Any of these foods would have costed much more in the restaurant, even if ordered a la carte. As we headed back to the car, we decided this was one festival we would be more than willing to explore again next year. 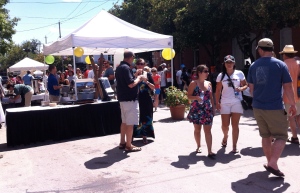 Jon had mentioned the Cuba Cheese Shoppe on the trip to Ellicottville earlier in the day to which Luke (the cheese lover) perked up. So on the way back we took a country route that led us through Cuba. 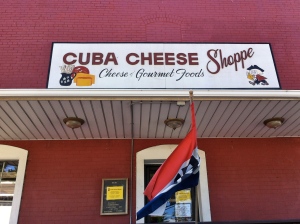 Once inside we started of course at the sampling table which included local sharp chedders, amish swiss, and surprisingly Tillamook cheese (a cheese factory located on the Oregon coast Luke and I went to on our honeymoon -told you Luke was a cheese guy). 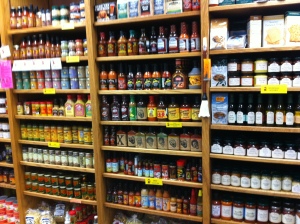 We wandered their store full of sauces, candies, dried fruits and nuts, and of course plenty of cheese wedges, slices, curds, and spreads. Luke and I picked up a few goods and we were once again on the road. 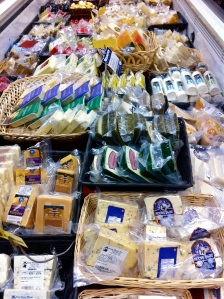 By 5pm we were back from our all-day outing.  An hour or two later Luke was ready and excited for our dinner. We split the juicy ribs and made a spinach salad topped off with some sharp cheddar cheese  balsamic vinaigrette. We ended it all with our blueberry cheesecake. 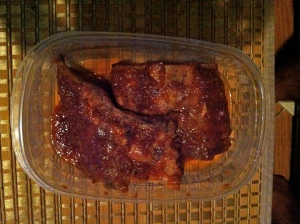 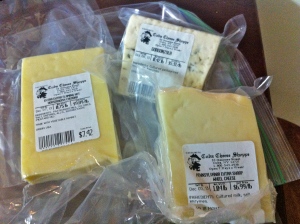 What did you do last weekend?

2 thoughts on “Taste of Ellicottville”