This past Saturday afternoon we chose to check out yet another local event. We drove up past where Luke works to Hammondsport for Smoke on the Water, a local BBQ competition benefitting the fire department. I have mentioned Hammondsport on one other occasion (see stars hollow, fireworks, and minions) but if you didn’t get a chance to read-up on it, Hammondsport is a quaint town full of bed and breakfasts at the base of Keuka lake and the Keuka wine trail.

Now I know it seems like this summer I have talked a lot about BBQ (if you want more reading see Kayaking and BBQ, or Racefever and local BBQ). But I have discovered it is a favored food of Lukes (and why wouldn’t it be for a meat-loving male) as well as it seems to be one of the big “things” for summer around here. 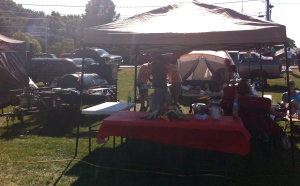 If you recall, this is not our first summer BBQ competition. Back in July we drove up to Rochester and attended their BBQ and Blues Fest (see two festivals and korean BBq). But were sadly disappointed that although the BBQ places represented were well known there were only four of them. Also in order to even taste the food you had to buy a ticket to get in, and a plate of their expensive food. Not what we were expecting. 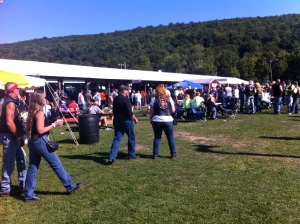 Smoke on the Water was almost the exact opposite.  Walking past the baseball field to the fire department’s lawn we looked around, the place was packed! There were more than 14 BBQ competitors , many had set up their 5th wheels behind their booth for the weekend. There was everything from Mom and Pop recipes to professionals trying to get in on a cash prizes.

We found out when we arrived at the beginning of each hour from 1-4pm a new category of meat would be available for sampling: chicken, ribs, brisket, and pulled pork. And only 6 bucks for unlimited samples!  At the end of the hour they collected the public’s voting cards.

We realized then if we had come at 1pm we would have gotten plenty of tasty meat samplings all afternoon. People were rounding booth after booth with little sample cups in hand. A band played while groups socialized and drank. In case the voting public got hungry in between samples, the fire department was selling french fries, a local restaurant was selling clams and lobster, and there was beer and wine sampling available. Or if someone had a sweet tooth after the salty meat they could head to a booth for floats or ice cream. 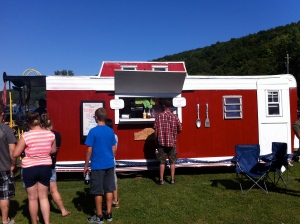 There were also plenty of activities including  a 50/50 raffle and silent auction, a cake wheel (instead of walk), and several kids activities.

Since we’d come so late in the competition we decided it wouldn’t be worth the money to sample (there was only one category left). So instead we went to one booth selling meals and for 13 bucks got the Garbage Plate to-go. 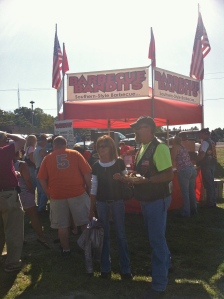 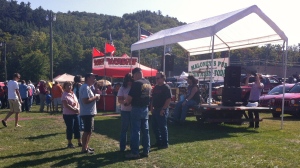 When we got home and un-packed our garbage plate we realized it was a giant plate perfect for sharing between the both of us. There were at least 6 pieces of brisket, a good portion of pulled pork, at least 3 ribs, 3 large butter garlic potatoes, and a good helping of other sides: coleslaw, a pickle, baked beans, and pasta salad. It was all amazing and delicious.

We now know that this is an event worth coming to and the earlier the better.

Have you discovered any local events worth returning to year after year?

2 thoughts on “Smoke on the Water”