I ended my last post with looking back on my brother’s wedding ceremony a month ago (to get caught up see: The Wedding).  After the ceremony we left the Moseng house and headed to the Sons of Norway downtown Poulsbo. Luke and I carpooled with my in-laws and arrived quickly after most of the bridal party. 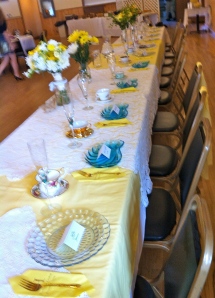 Everything looked wonderful just as we had set it up the night before (see The rehearsal). The head table was decorated with a full yellow table cloth  and crocheted runner. Mason jars lined the head the table prepped for placing the bridesmaid bouquets in. The table was set with an eclectic collection of tea cups and blue glass plates. 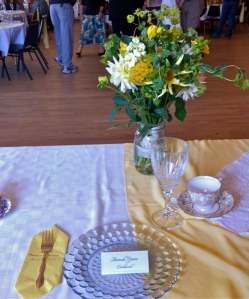 Each yellow monogramed napkin was folded in it’s place. As we settled in I saw the MC/DJ was setting up by the favor table prepped with crates full of mini jars of spiced apple jam. People were beginning to fill into the guest tables and mingle looking at family pictures, signing the guest book, and writing adviced cards.

Guests began to line up for coffee punch in glass cups, hot coffee, or tea.  Once drinks were served the line for the create-your-own snack at the trail mix bar grew quickly.

When all the guests arrived, the wraps, sandwiches and fruit salad were laid out and once again a food line began to form. Once the bride and groom had arrived the fun began. Sparkling Cider was poured for all guests as Stina’s father, her sister, and my brother’s Best Man Andy gave toasts. Following Matt and Stina had their first dance then Stina danced with her father and last my brother danced with my mother.

Then all married couples were asked on the dance floor. During a basic waltz the MC called out numbers if a couple had been married less than that number they were asked to leave the dance floor. Luke and I knew enjoyed our 45 second dance then twirled off when “one” was announced. The last remaining couple had been married more than 60 years and Stina gave them one of the bridal bouquets. 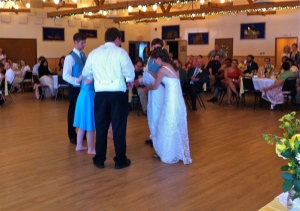 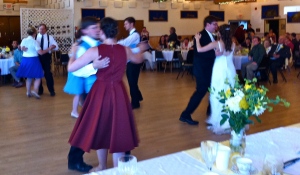 After this the traditional folk dancing began. All the Moseng siblings and their now spouses danced together. Then the Moseng parents joined in another couples dance.  Last it was our turn.

Stina’s mother Lisa came to the mic to instruct us as all were welcomed on the dance floor to learn a few Norwegian folk dances. The first dance was basic, taught to the first graders but by the third or fourth dance the number of steps had increased dramatically. Although there were many mistakes and moments of confusion it was a great way to meet other wedding guests and share in the local and family culture. After trying to do a “Grand March” through the many people on the dance floor the folk dancing ended.

Stina and Matt of course also did the bouquet and garter toss. This was my first wedding other than my own to not be in line for the bouquet. One of my cousins got the garter at my wedding and this time his older brother got Stina’s.

The plates were then cleared and Matt and Stina went to cut the traditional European wedding cake. White cake with raspberry and bavarian cream filling was served alongside refills of coffee and tea. The dance floor was opened once again to classic slow dancing and swing music. 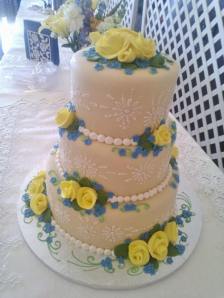 Slowly the non-relative members of the bridal disappeared to decorate the couple’s car. As dancing continued Stina and Matt talked with friends and family guests. Those who traveled from Oregon began to leave having a long day and a car ride to get home.  My family wandered out to the terrace overlooking the waterfront on this beautiful sunny Washington day as Stina and Matt got ready to leave.

We all gathered outside in the parking lot prepped with bubbles to shower the newlyweds as they left for their honeymoon. When Matt and Stina arrived at his CRV we all pitched in to clear the windshield of Oreos, the sun visors from rice or glitter, the inside of the car from balloons filled with glitter (among many other things). Every window was covered with writing and of course there was a string of cans tied to the back bumper. After a little frustration trying to clean off the car they were off to catch a ferry ride to their hotel for the night.

Luke and I had a red eye flight to catch that evening back to New York so we took some time to say goodbye and thank you to the bridal party, Stina’s family, and then our own. We headed back to the hotel with Luke’s parents, changed and packed for the airport. Then we left for Seattle for one last night in Washington (see Little Norway and the Emerald City ).

August 3rd was a beautiful day and it was such a wonderful wedding. Every detail was noticed and appreciated. It takes a lot of work to pull all the the pieces together but with everyone working together the day went pretty smoothly. I was so glad Luke and I could be there to celebrate in such an important day in my brother’s life.

One thought on “The Reception”