Last Saturday Luke and I drove up to Ithaca for their annual Apple Fest ! As you may know from past posts (cinnamon oatmeal apple muffins) I love apples, really I do.

I know that it is typical to think of pumpkins come autumn, but first in my mind is apple season. Growing up my family  each year would escape from LA’s heat and drive up to Oak Glenn to get apples at a local orchard. We would sample the year’s variety and pick a bagful of apples and other treats then head to one of the several area restaurants serving  apple pie. Last Fall before our wedding, we took my Dad up to Serendipity to see where we would be getting married. Then we drove minutes down the road to the Oak Glenn apple orchards to pick out local apples to decorate our wedding venue, and afterward as is tradition, we went to get apple pie.

With that background, let me share about this years apple experience. We arrived downtown Ithaca around 2pm and paid an event parking fee of $5 then set out to find a map and explore the festival. The first we notice was how crowded it was!! This was obviously a very popular event,, especially with the local college scene. 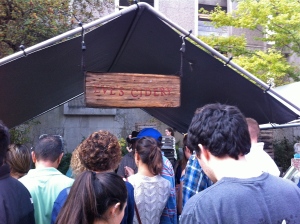 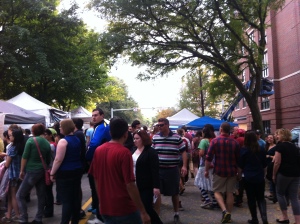 We started this multi-street venture with exploring apple vendors, bakers, and ciderys on Aurora st. It was difficult to maneuver through the crowd of people, some standing in front of vendor booths, other waiting in lines for hard cider tastings or to buy carmel apples or  kettle corn. 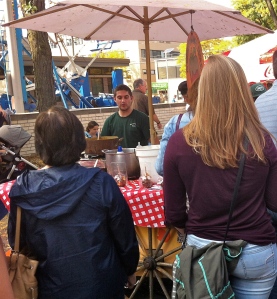 When we came to the end of the row we noticed a long tent so packed with people you couldn’t tell what was being sold.  As we got closer we saw table after tables overflowing with local amish baked goods including pies, cakes, fudge, brownies, crisps, and cobblers. Rounding the booths we priced some of the apples per their pecks and shared a hot spiced cider for $1.50.

We then took a break from the crowd and turned onto E. State street where a parking lot had been reserved for more vendors. In this lot were several more orchard/apple vendors, wineries, breweries, baked goods, and a live music stage.

A line the length of the parking lot had formed at the end of Little Tree Orchards s waiting for a new batch of their apple cider doughnuts. Considering their popularity, we decided to buy a large bag of Northern Spy apples. We tried several of the wines and beers and Luke discovered one of the companies’ coffee stout was eerily similar to his own first brewed beer (for more on this see The home-brewing has begun). 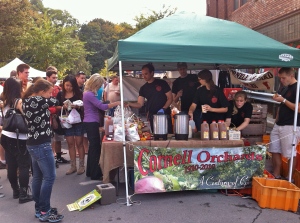 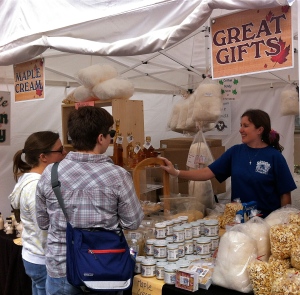 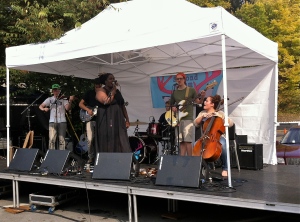 Taking turns carrying the bag of apples, we walked through the commons and to cayuga street to check out the craft vendors. We saw much of the same vendors or goods that were available at other festival throughout the summer/spring the usual: clothes, jewelry, photography, paintings, and custom wood or metal work.

We also toured a smaller simultaneous festival occurring in Dewitt park called “The First People’s Festival.” The highlight of this seemed to be for children who were given the opportunity to make native crafts or hear traditional tribal stories. There were not many distinctive cultural crafts being sold that I could see and I was disappointed to walk away not feeling like I learned much about the four to five local tribes in the area. 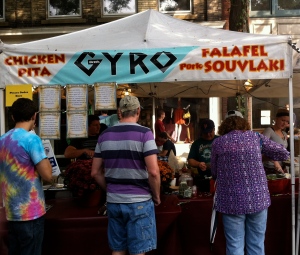 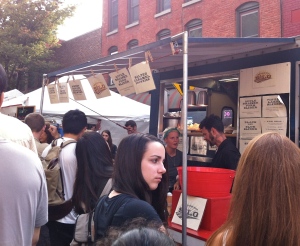 Last but not least we explored the food vendors on W. State st. which were all the cheap and unhealthy fair foods we’ve seen at every fest or carnival. But on the south side of Cayuga street was the international food market. From vietnam,  to India, to Cuba or good old American with a twist they had it all! Although it all looked and smelled delicious, we decided to just grab an iced chai tea and head back to the car. We had a beautiful sunny drive home and enjoyed watching the hills filled with fall foliage color, it was the perfect ending to a great fall festival day.

So what did we do with all of those apples? Stay tuned to find out later this week. . .