During the past almost year of living New York,  there have been several missed elements from my home state of California (for some see I miss my old life). One of the items in short supply (or quality) is Mexican food. I was spoiled in SoCal.  Mexican restaurants are more plentiful than Mcdonalds’. Each restaurant or fast food joint had their best specialties and all were authentically delicious. Mexican has always been my comfort food so it was hard to leave behind the tamales, enchiladas, chile rellenos, and good guacamole rice, and beans. 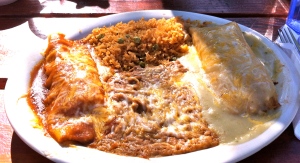 Luke and I have kept an open mind and while trying the few Mexican restaurants here. We’ve been to chains and hole in the wall places  we have been everywhere from Rochester, to Ithaca, to Buffalo, to Oswego and everywhere in-between. Each time we were disappointed. The meat was not marinated and bland. Tomato sauces tasted more like Italian pasta sauce. And the beans and rice? Rice had not kick and the beans no flavor. We kept hoping for one half decent place to get that taste of home.

On our way back from our anniversary trip (see Niagara Falls Anniversary ) we stopped for a late lunch and gas in Batavia. Here we decided to brave once again a little mexican restaurant called Ranchero Viejo. We ordered our typical taste-tester foods and were surprised, it wasn’t half bad. The rice had flavor, the beans had a little too, the salsa had kick, but the meat was still a little bland. Overall we were grateful even if it wasn’t on par with what we are accustomed to.

When we first moved to Corning there was a small mexican restaurant called Toto’s on Market Street. It was never open  and before winter was over it had closed completely. The store front sat empty for months. On a drive last week through downtown we were shocked to see a new mexican restaurant had moved in and opened! Fiesta Brava! We were skeptic but willing once again to try.

On Sunday we met some of our friends at Fiesta Brava for lunch after church. I was nervous the food would be bland. But as we waited for our friends to arrive we started with the salsa-best we’d had in the state. Then we looked at the menu: it was the same menu listing as the restaurant in Batavia! We soon realized that they must be connected. This gave us a little hope.

When it came time to order I chose a risker lunch combo of chili relleno, taco, beans, rice and guacamole. Luke ordered the same fajita burrito he had eaten in Batavia but ordered chicken instead of beef. When talking to the waiter he asked if the chicken was marinated in the same seasoning as their carne asada like he had had in Batavia. The waiter-in a very proud confident voice stated very clearly their food was  better than Batavia. And he was right. It was the best Mexican food we have had on the East Coast so far.

My Chile Relleno was delicious lightly battered in egg, the pepper had a kick to it and the beans tasted like actual mexican refried beans. I never thoughts I’d judge mexican food based on such a simple dish. The rice had the spicy tangy flavor I’m used to and the taco dripped with juicy ground beef. I was beyond happy. Then Luke offered me a taste of his fajita chicken-the marinade they used was excellent far from the boiled shredded flavorless protein we’d had so far.

I am grateful for this little new Mexican place full of flavor and life.  It is a small blessing to once again get a taste of home thousands of miles from it.

One thought on “A Taste of Home”