We learned the hard way last year that if you don’t buy meat and goods before the Memorial Day weekend then you are out of luck. BBQ’s are extremely popular for this holiday weekend especially as people enjoy the many festivities occurring down town for our annual Glassfest . So this year I thought ahead and got all my meats  in advanced. (see last https://agreenesadventures.wordpress.com/2013/05/28/glassfest/ year’s post on glassfest)

Two Saturday’s ago I bought a chuck roast then cut it up into good sized chunks  because they shrink up when cooked.Then I placed all in a gallon size plastic bag and pulled out the marinade fixings. I didn’t portion/measure things  but I can tell what was included: soy sauce, worshiher sauce, sirachia, and a little orange juice. Adding the orange juice may seem odd to you but if you ever have had fajitas then you’d may be surprised to know that most fajita meat is usually marinaded in a good portion of orange juice. The orange juice adds the citrus and sugars that help break down and tenderize the meat as well as flavor it. Then I added the spices; a little cumin, garlic, and of course salt and pepper.

The longer you let the marinade the sit the better the flavor. I put the plastic bag in the fridge in a bowl, so that in case there is a leak it doesn’t get all over the fridge. Each time I went to get anything out of the fridge I took the bag and swish the meat and marinade around and flip over the bag in the bowl.

When it’s time to make the kebabs we chopped up  our veggies (remember both the meat and veggies shrink on the grill). We usually use green peppers, onions, sometimes grape tomatoes or mushroom. We took tin foil and wrapped it around cooking sheets; took the bag of marinade meat, bowls of cut veggies, then layered up the skewers according to personal preference.  Luke always does an all meat one to which I feel compelled to balance with an all veggie one.

We’ve done kebabs with friends several times; it’s great if people are willing to get their hands a little messy. Everyone can combine whatever amounts of meat to veggie ratio (or types of veggies they like). 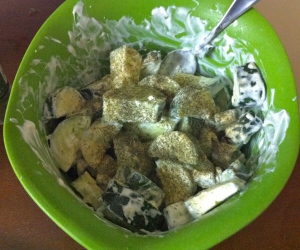 I usually serve this all up Mediterranean style with a salad of grape tomatoes, cucumber, and light olive oil/lemon sauce this year I chose to do a yogurt cucumber salad. I combined a 1C of greek yogurt with olive oil, lemon juice, dill, and a little salt/pepper to chopped chunks of three large cucumbers.

And that’s was our Memorial day Steak Kebab meal! We ate it out on our front porch;first time for the summer.

So what do you BBQ up for Memorial day?

Do you stick to the classics; hot dogs and hamburgers or do something unique?