In the summer time here in the Finger Lakes there is at least one ( if not many) festivals every weekend. So there is no way to check everything you want to out all in one year. Last year we stayed local and went to Glassfest for the weekend of Memorial Day.

For more on this see: https://agreenesadventures.wordpress.com/2013/05/28/glassfest/ 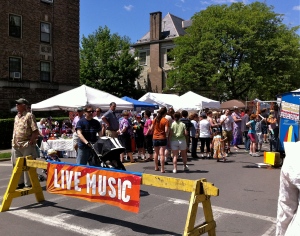 This year instead we decided to go to Ithaca-fest; another town-festival this one always held the weekend after Memorial Day. Over the past year and a half we have explored several Ithaca based festivals and always enjoyed them for the people watching (college students), local musicians, and of course the best varied and international festival food in the area. For more on some of the Ithaca festivals we have enjoyed see:

So we left around 1pm on Saturday and took the scenic route through Walkins Glen toward Ithaca enjoying watching the sail boats on Seneca and Cayuga lake on the drive up. When we got to town it was clear the whole city was buzzing with activity. This 4-day long festival kicked-off with a parade on Thursday, and festivities around the commons are held Friday-Sunday. 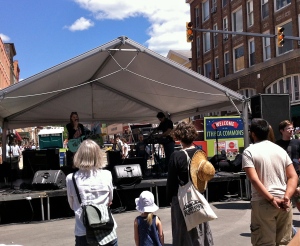 Each day of the festival multiple stages placed throughout the closed roads hosted local musicians representing all ages and styles of music. In addition to this, the park and church stages included smaller local cultural activities such as youth dance, Hawaiian dancers, belly-dancers, youth orchestra etc.

Several city blocks were taken up with local crafts: photographers, painters, jewelry makers, woodworkers, food goods and more. Speaking of food this past week was also Ithaca restaurant week featuring special offers from some of the best local restaurants as well as several local ingredients/sourced three course meals. One full block of the festival was devoted to the many wonderful varied food vendors everything from Tibetan, Thai, and Indian to Tacos, BBQ and potato pancakes. We enjoyed walking the winding streets even though it was very busy.

We were a little surprised with how extensive of a hype this festival gets that the commons, which has been under construction for more than the past 6 months, was still torn up and unfinished. Also, for the many stages and performers there were no places to sit and watch the musicians, performers, (or just people watch). There were some tables set up for the food vendor area but it was far from enough to accommodate this large crowd.

We did noticed that this was much more  family festival then previous Ithaca festivals. There was only one winery represented, a very small beer/wine area at one performance stage, and few college students around. Instead the festival crowd was mostly made up of  families enjoying the sunshine,  children’s activities and rides, and some local ice cream.

Overall it was a great day to be out and about but we were done exploring after an hour and a half and left the crowd behind to explore on our own. In our explorations we found a new Korean grocery store and the best Chinese food we’ve had on the East coast we drove home happy (and a little sunburnt).

Have you done any local exploring? What summer activities are you looking forward to?