Monday was our last full-day of camping so we wanted to savor it and take it slow. We started the morning with a super still and quiet campsite, coffee, and a big breakfast of eggs, potatoes and bacon. We planned to make this a water day; so we packed up our swimsuits and covered ourselves in sunscreen and headed to the state park marina. 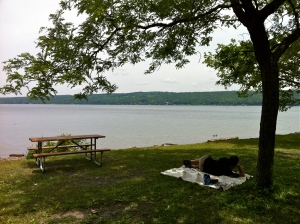 The Tauhannock Falls Marnia is right across the stress from the falls gorge trail. The water from the gorge river/creek flow directly into the lake through walkable inlets. Luke grabbed a book and I took a journal and we found a perfect resting place along the Cayuga lake waterfront at the Marina to peacefully read on the picnic quilt.

After an hour or so we checked out their rental kayaks and found only one tandem. We decided instead of heading out into the large lake’s open waters alongside the many larger fishing and power boats to drive into Ithaca. We drove back into town and found Puddledockers; a kayak and paddleboard rental and retailer found close to the farmers market. For under 40 bucks Luke and I were able to rent a tandem kayak for two hours. After discovering we had our own lifejackets and had obviously been kayaking before they gave us our paddles and a laminated map of the inlets and waterways around Ithaca and out towards the lake.

We took off around 2:30pm; a time that is after the most sun and wind but still early enough to not get dark or cold. We explored the marinas around Ithaca and paddled past the Farmer’s Market at Steamboat Landing. We enjoyed touring the many sail and power boats on our way out toward the State Park Marina. We enjoyed sharing the waterways with many goslings of geese as well.

Although it was a Monday we were not alone on the waterways; other kayakers who had rented from the same location also toured the area as well as several groups from both Ithaca College and Cornell’s rowing crew; we passed both of their rowing centers along the marina.  We turned back around before we hit the more open waters of the lake then backtracked down along the canals that go under roadway bridges that parallel downtown Ithaca.

We came back to the dock at Puddledockers at 4:10 after a relaxing paddle around. We had enjoyed some beautiful views of the cities parks, Marinas, as well as some great views of Cornell and Ithaca College up on the hills.  Before heading back up to our campsite we stopped for an afternoon treat at Yogurtland. 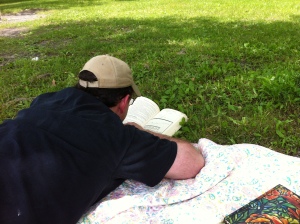 Then we went back to our spot along the Cayuga river at the State Park Marina for another hour or two of journaling, reading, and relaxing; this time we were joined by Geese and some shore side fishermen. As we got closer to dinner time the BBQ summer dinner crowd came in and we headed back to our campsite for our own dinner: tacos. That night we enjoyed the last of our firewood and our last quiet night of camping.

The next morning we were happy to see that although it had rained during the night our tent was dry. We got up and moving with coffee and a quick breakfast and took down camp. We were on the road and back to reality (after a stop for some extra coffee) and got home before 1pm ready to unpack and regroup for the rest of the busy week.