A few weeks ago L’s brother and family came to stay with us for the weekend on their way to New York City. We tried to think of what to do with them in this very snowy season and decided to talk them to Strong’s Museum of Play in Rochester.

L’s brother had to stay home and work so it was L, myself, sis and law and the niece and nephew. When we got up there we decided to first go to a magic show.

Our niece (4)  loved it but nephew (2) was a little squirmy so Uncle L took him to go play somewhere else until the show ended. When we got out of the magic show, we let the kids explore 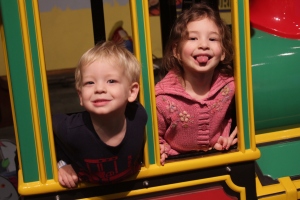 My nephew who loves trains enjoyed riding the train with his sister and Aunt (me) since they are still too short to ride alone. Although we enjoyed the open floor plan play we knew the kids were tired of it and so we moved on to the next place my favorite: Reading Adventure;and.

Each little play area was based on a genre of books: mystery, fantasy, adventure, fairy tale. In each section there were museum collections of toys, movie memorabilia, crafts, and things to climb, props to dress up in and buttons to push. On top of all of that, each area had books from that genre you could check out from the Museum using a Library card. 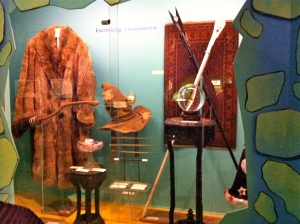 My niece spent over an hour in the fairy-tale land climbing jack’s beans stalk and playing “house” in the gingerbread house. Meanwhile my nephew explored the shipwreck iand made a crown at King Arthur’s round table. While they were busy playing L and I decided to explore on our own.

We walked around the comic-books superhero area where L and I were able to have some fun of our own: playing an old arcade game Captain America and the Avengers.

Once again the kids content L and I went upstairs. We found the grown-up play area: the arcade.On the outside walls were many popular games such as a giant light bright, tetris with giant joy sticks, guitar hero,  pixel computer game some newer (2000’s) and some older (1980’s) . In the middle was a tokened game area with arcade games including frogger, pac man, Atari star wars x fighter games, pinball machines and many more.

It was getting close to dinner time so we headed to the front and had a short ride on the carousel before heading back into the snow.

Once settled in the car and after snacks both kids were sound asleep as we drove back to our house. It was a successful day of play.

2 thoughts on “Museum of Play”