Here she is: Meet the newest member of our household: Sienna (Sia for short) 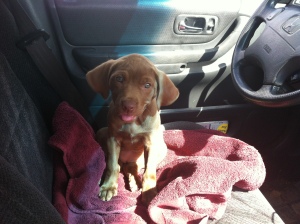 A week ago our application with East Coast Adoption Agency, a rescue that takes litters from high kill shelters in the southern states and transports them to foster homes in the central New York, went through to adopt. We then waited anxiously  the foster homes to intake new puppies. On Thursday we saw one foster home had lab/retriever mixes. We called that night to make an appointment for Saturday. 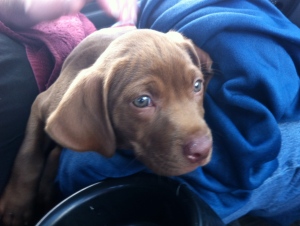 When we got to the foster home we were directed to the basement where the litter had been set up in a play pin.  We had the option of 2 females and one male all chocolate labs. I was unsure on how to pick, there were all adorable. So we watched the dogs interact, saw the male was docile and both females dominated over him fast. Sienna was playful but not as aggressive as the larger female, she was also not easily distracted. She sat and calmed down when I rubbed her chest-that was when I knew we’d take her home. 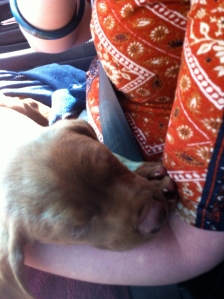 She slept fitfully on the long drive back but did not shiver. She was hesitant around L but followed me around the house as she explored her new surroundings. 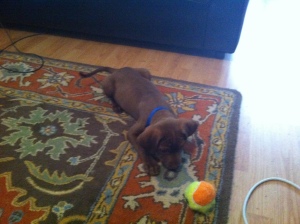 Sienna is intelligent, emotionally intuitive, playful, loves being outside, and a quick learner.  We’ve gotten her into a pattern already: play outside with us, play independently inside, nap, take her back outside repeat. Yesterday she got the whole day with L while I was at work so she’s now comfortable with him.

Sienna has already learned to sit by a door to show she wants to go out and if she has to go inside she’s only gone on newspaper. 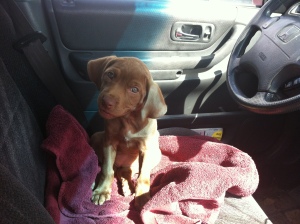 There’s been a lot of progress in sleep too. First night we tried to put her in a tall plastic packing container as a temporary crate, although it was taller then her she found a way to get out. So plan B we put her in the upstairs bathroom next to our bedroom with newspaper. That worked until three in the morning when I ended up sleeping in a sleeping bag next to her on the floor.

Last night we had Sienna spent her second night in her crate in our bedroom. She slept or played quietly without problems until 5:30!! Anytime she whined and didn’t calm down on her own we were able to call her name and remind her we were still there. L took her out this morning and she settled in again until he got ready for work, we are still getting used to the morning routine. 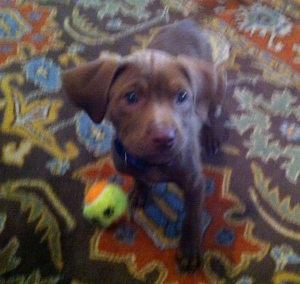 At first I worried if we chose correctly, or could handle the responsibilities but there are no worries now she is a wonderful puppy and a great addition to our home.