On our trip to NYC:.After our afternoon outing we returned to the hotel to re-group before our evening plans. We change our clothes and left again for uptown.

We had made reservations at a restaurant uptown close to the theater. K Rico is a upscale Latin fusion steakhouse. We were surprised to find the place empty, and I felt a little ridiculous for reserving and table and rushing over there so quickly. We both got glasses of wine then decided to look at their pre fix theater menu.

Many of the restaurants in the theater district provide a menu that is only available for either before or after theater shows that provides minimal options. What this does is guarantee your food will come out faster so you will not be late for a show. It also means that you are getting a package deal on three courses at a decent discount.

I got filet minion with pureed cauliflower, L got the skirt steak in chimichuri sauce. My steak was perfectly cooked and with a sprig of rosemary under it was very fragrant.  Then came dessert, I ordered Tres Leches and L got the chocolate and coffee flan.

We then walked a few block over to our theater where we were surprised to see a long line outside. Apparently because these theaters are smaller, everyone is let in at the same time even though we all had set seats. 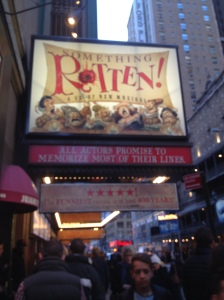 L and my seats were in the mezzanine and we were concerned about our view, I was shocked to realize the theater was smaller and built so that you really couldn’t get a bad seat. We could clearly see the stage and all characters on it, not squinting necessary. 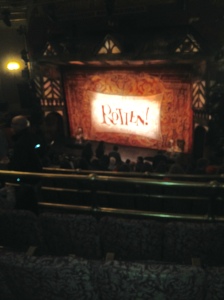 The musical “Something Rotten” itself was perfect. This was both of our first times seeing a broadway musical in it’s first run with original cast and you could tell. Every dance number, song, line, was done with the same amount of energy and focus as the next. Looking at the playbill most leads and some extras had been in other broadway productions, if not they had been on tours, all had experience. 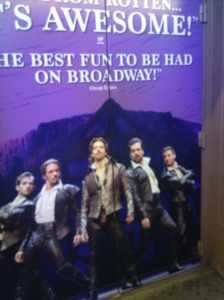 It was a hilarious comedy with a unique story line and characters played preformed well  enough to be nominated for and receive several Tony’s for their performances. A perfect option for L and I.

As we left that evening we traveled through time square to get to the Subway. Because of the time of night it was crowded as everyone was streaming out of their theaters. It was bright, noisy, and claustrophobic. After only blocks on the main street L said that was plenty of time square for him. We found the subway station and headed to our hotel.