So I’m experimenting with a new food art: pickling. Right now I’m trying out fridge pickles, that don’t require a pressure cooker, but if I get this down who knows?

I thought it would be a skill to learn before our summer garden produces more than we can handle at one time. 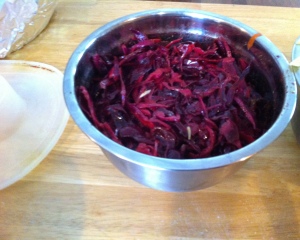 I started with a batch of pickled red cabbage also know as red cabbage slaw. I’ve made this several times since February’s Super Bowl.

But this time I decided to use mason jars instead of a bowl. It saves space in the fridge and because of the glass we can easily see when it is ready to eat.

Then I had some leftover carrots from when my mother-in-law was here visiting a few weeks ago. Since we are growing carrots right now in the garden I thought: why not try pickling a few.

I ended up trying two different recipes. One an Asian spicy carrot. These carrots were julienne placed in the jars then covered in a pickling brine of: rice wine vinegar, sugar, salt, sesame oil, fresh ginger, red pepper flakes, garlic and a little star anise.

After taste-testing our progress this past week, these carrots seemed a little heavy on the  anise so we cut back and added more ginger and garlic. 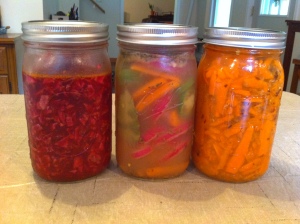 The second recipe was a Mexican carrot mix. It is based on the pickled vegetables you would see in a taco place in central Mexico. For these pickles I used baby carrots cut longways, although next time I might do them as medallions, and combined the carrots with jalepenos, and red onion. Now I took most of the seed out of the peppers so you would get the flavor or the pepper with out too much kick. For the brine: apple cider vinegar, cumin seed, salt, garlic, bay leaf, and oregano. If I have enough cilantro from my garden I think I may add that to the mixture at some point as well.

After taste-testing these carrots I’d say they are well on their way to being very yummy.

One thought on “Summer Pickling”