This past weekend L and I decided to check out another local Christmas event. During most of December (9th-25th) a local park hosts a light display open from 6-9pm for people to drive through. FYI I am not the best i photo taker but I hope they still provide a glimpse of what we experienced.

We arrived at the park right as the after-dinner line started outside of the park entrance. It took awhile to get to the main gate but the path was well lit and cheery. 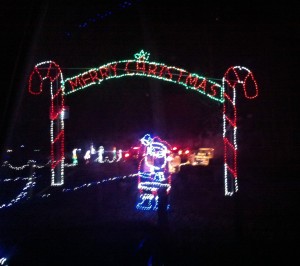 Passing the entrance booth a sign showed the name of a local AM radio station playing classic Christmas music. We tuned in and waited in line until there was a good distance between us and the car in front of us. 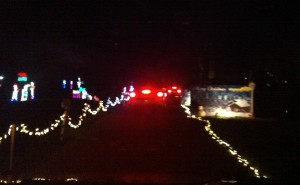 Along the right side of the loop were well lite holiday greeting billboards sponsored by different donors from the local area including business, organizations, and churches. Since we are new to the area we found this helpful.

. There was something to see for everyone including: scenes of penguins playing at the north pole, Santa rocking out with Rudolph on the guitar, (or peeling away in a hot rod), a train filled with toys, carolers singing outside of a church, and a nativity scene.

This little trip gave K a chance to cuddle into a nice warm car with us.  I really do think she enjoyed the lights, she stared intently out the window for the whole loop switching occasionally to different side of the car so she could look out both windows.

I grew up near Los Angeles and went several years to huge light displays at Griffith park near the observatory.  The LA display is a major time commitment and requires hours of sitting on the freeway exit to even get to the display. In fact it has recently been replaced by a light display at the zoo probably for that very reason.

This i was a nice less-than-an-hour Christmas outing which supports local events and non profit organizations, that is a great Christmas win in my mind.