The faire was about an hour from home, based on reviews and our free promo tickets, we were under the impression this was an up-and-coming event. So you can imagine our shock to see hundreds of cars in a field off the main highway and police directing traffic.

After entering the main gate, we hung left at the may-pole and began to explore. A renaissance faire often brings about images of turkey legs, beer, and showing off a little too much skin. Although yes, there was some of all three it was limited.

The faire had two out-door pubs requiring ID; this way the alcohol and the more suggestive entertainment was contained in a 21-and-older environment.  For example, we enjoyed a rowdy performance by a Pirate-themed troop of actors and singers in the smaller of the pubs with plenty of suggestive word play. 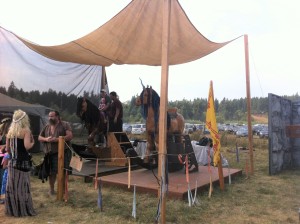 At the other pub we enjoyed beer and sampled mead as the main jousting events took place. Half the seating was around the bar, the other was a kid-friendly zone on the other side of the arena. Events included horse racing, long sword fights, jousting, fencing and more. The performers interacted frequently with the crowd and it was a popular event. If we knew we would have gotten food and ate at seats waiting in advanced.

We were surprised to see many families with little fairies, dragons, robin hoods, peter pans, and princesses just as much as we saw costumes on groups of adults. There were many children specific forms of entertainment including puppet shows, a robin-hood play, and musicians.

There were also interactive opportunities for adults including lessons in archery, long sword, and throwing axes. Beyond this payed entertainment there were interactive displays including a Latin mass service, a gypsy camp, and the may-pole dance. 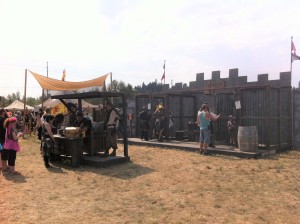 We enjoyed wandering the booths of art vendors selling maps, leatherworks, metalworks, wooden goods, costumes, and more. It was nice to see different art and products that cater to a specific crowd.

We left with filthy feet and a little sun-burnt but we had a great time.  L and I decided we would come again when we have children old enough to appreciate and enjoy the family-friendly activities.

One thought on “Renaissance Faire”